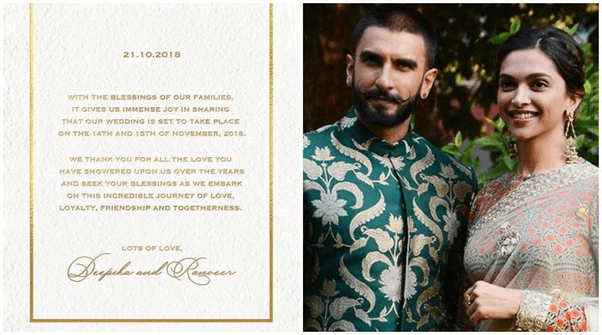 A wedding news on which fans are happier than the couple! No, we are not talking about Salman Khan! The heartthrob couple that is viral in news today is Deepika & Ranveer. Finally, on the 21st of this October, Deepika Padukone comprised the Sunday of her fans with this stunning news, and as usual, it didn’t even take a minute to become viral in the social media and news channels. Their marriage dates have been fixed in this coming November 2018, as you can see in the picture. This is the picture of their marriage card that was shared this Sunday on Twitter.

Deepika & Ranveer is the hottest couple of the b-town. People who follow daily latest news and blogs, they know that this couple is always on the vibes of news channels. Be it for controversy or romantic camera moments, Deepika & Ranveer are always the favorites of Bollywood fans. Now their story of marriage is spreading like a rage where it’s getting enormous retweets and comments ahead.

We all know that Ranveer comes in one of the top 10 highest paid Bollywood actors, who is also known as the ultimate flirting star. There has also been much news which says that even after being engaged with Deepika, she did hang out with many co-actresses. We don’t know how much of that is rumor and whats the truth. The same goes with Deepika when it comes to the big names like Vin Diesel, or Ranbir Kapoor. But even after having such news in media the couple is significantly having a great chemistry and love which finally made them take the step forward to marry.

Ranveer and Deepika were first encountered onscreen together in the Sanjay Leela Bhansali’s 2013 romantic drama & thriller movie Ram-Leela. The movie was a hit and loved by critics too. It did a good box office business. Therefore, after Ram-Leela, they again appeared in two big Bansali hits, that is Padmaavat and Bajirao Mastani. Having such great acting and direction in the movies, the two movies become big hits of Bollywood history. After the success of Ram-Leela, in many news encounters, Ranveer has praised the support, skills, and togetherness of Deepika Padukone. He even stated, that he has fallen in love, and this is a great feeling for him. The gorgeous Deepika was still silent and didn’t react negatively. All the viewers of Bollywood came to know about their real-life chemistry simultaneously after multiple interviews of the two stars, and now finally, they are going to be engaged forever.