Home » The Benefits of LNG for the Global Environment 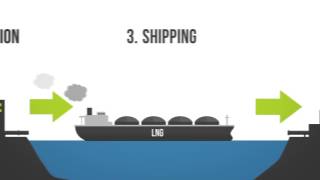 The Benefits of LNG for the Global Environment

Liquefied natural gas is becoming increasingly popular in the world. Developed countries are increasing the share of natural gas in the energy balance for reasons of environmental safety and diversification of supplies. It is an ordinary natural gas cooled to -162°C (so-called liquefaction temperature) for storage and transport in liquid form. Liquefied gas is stored in isothermal tanks at the boiling point, which is maintained due to the evaporation of LNG. For use, LNG is vaporized to its original condition without the air presence. During regasification, about 600 cubic meters of ordinary natural gas are formed from one cubic meter of liquefied gas.

Liquefied natural gas is a mixture of methane, ethane, propane, and butane with a small amount of heavier hydrocarbons and some impurities, in particular, nitrogen and sulfur complexes, water, carbon dioxide, and hydrogen sulfide, which may exist in the source gas, but must be removed before liquefaction. Methane is the most important component, usually, though not always, over 85% by volume.

Since LNG is a mixture, the density of LNG does not change much with its actual composition. The density of liquefied natural gas is typically between 430-470 kilograms per cubic meter, and its volume is approximately 1/600 of the gas under atmospheric conditions. Moreover, LNG has a lower density than water. It means that it can float on the surface in the event of a spill and return to vapor rather quickly.

Liquefied natural gas is odorless, colorless, non-corrosive, non-flammable, and non-toxic. LNG is stored and transported at ultra-low temperatures at atmospheric pressure (no high pressures). LNG evaporates quickly, leaving no traces on water or soil when exposed to the environment.

In its liquid form, liquefied natural gas cannot explode or ignite. When evaporating, natural gas can ignite if it comes into contact with a combustion source and if the concentration of vapor in the air is between 5 and 15 percent. If the gas vapor concentration is less than 5 percent, then there is not enough vapor to start a fire. Otherwise, there will be a lack of oxygen in the environment.

People who invest and work in this field, including Joseph Siegelman, highlight the advantages of liquefied natural gas, based on its composition and physical properties. LNG is not only a source of dry natural gas transported through gas pipelines but also a source of NGLs (light hydrocarbons – ethane, propane, butanes, and pentanes), which are part of LNG and are released from LNG during regasification. These hydrocarbons are used as petrochemical raw materials and as a source of environmentally friendly fuel for various types of transport and in everyday life. During the regasification process at the LNG terminal, the C2+ or C3+ fraction will be separated. The ability to transport NGLs as part of liquefied natural gas is not only in favor of the consumer, but also solves the problems of the manufacturer in transporting NGLs from the gas field.

As you can see, among the advantages of liquefied natural gas (LNG), in addition to environmental friendliness, non-toxicity, efficiency, and convenience of storage, as well as transportation and consumption (including the use of LNG as a motor fuel for vehicles) are distinguished. In addition, the use of LNG makes it possible to gasify facilities and settlements that are located in places remote from gas pipelines. Joseph Sigelman at Crunchbase estimates that about half of the communities that need gasification are economically viable to provide gas fuel in the form of LNG.

Liquefied natural gas is a safe and environmentally friendly fuel with high energy productiveness and octane rating. The price of LNG at a consumer’s cost is lower than the price of liquefied petroleum gas, fuel oil, and even more so diesel fuel.